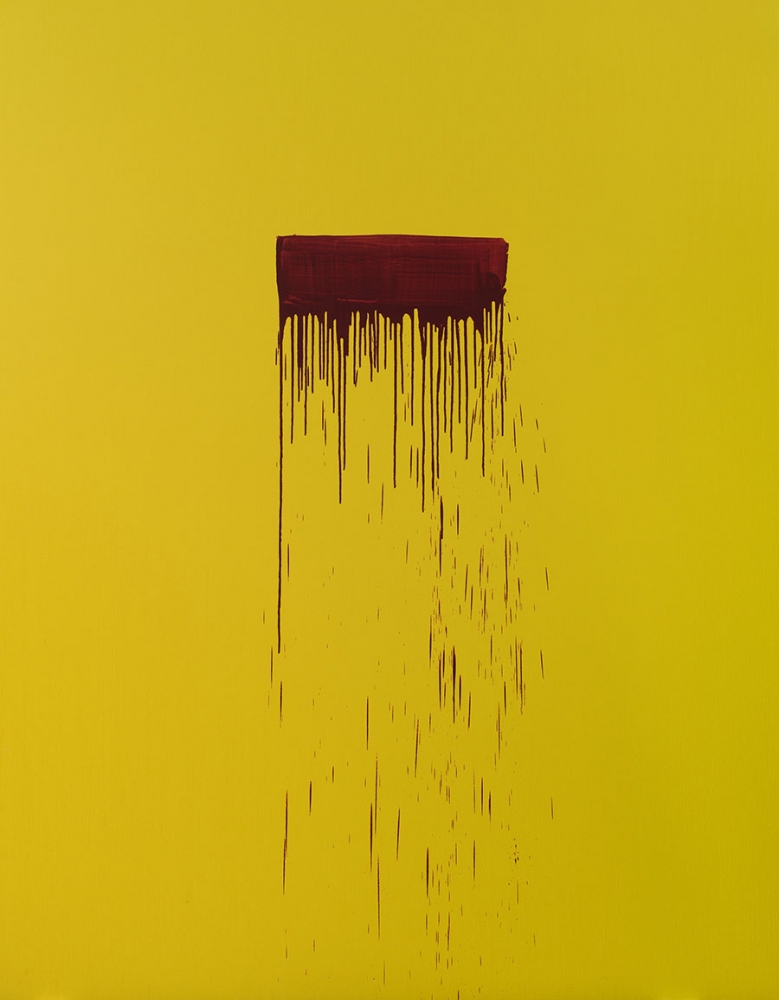 ‘I’m just tired of people saying: “Painting is dead.” It’s not dead,’ declared Pat Steir during an artist’s talk on the eve of her latest exhibition, ‘Color Wheel’, at the Hirshhorn. ‘I wanted to prove [that] painting can be [a form of] conceptual art as much as a video or whatever. It depends on the concept behind the work, not the material it’s made in.’ Over a career spanning several decades, Steir has witnessed numerous art movements come and go, but she is adamant that painting remains relevant. It’s an assertion she proves with this impressive show centred on a thematic series of 30, vertical-format abstract oil paintings.

Each work features a repeated motif: quick gestural strokes of bright paint horizontally applied atop a monochromatic canvas. Per the titular ‘Color Wheel’, the foreground colours complement the background hues – red pushes out over green, orange over blue, and so on – lending each work a subtle vibrancy. The contrasting palettes are further enhanced by the gestural chaos of the paint swathes, from which drips trickle down across the canvases’ surfaces. In this sense, it is tempting to see the show as a synthesis of the two dominant modes of postwar American painting: abstract expressionism and minimalism.

‘Color Wheel’ responds directly to the circular layout of the Gordon Bunshaft-designed museum. While its open cylinder of precast concrete – elevated on four columns – is distinct, the space can present numerous challenges for artists. Steir resolves them by hanging her works against an all-black wall, creating the optical illusion that the vibrant paintings are thrusting forward, as well as by evenly spacing the inwardfacing paintings, thereby compelling the viewer to observe them from the Hirshhorn’s central axis. As Steir explained: ‘The circular gallery suggested a colour wheel; it’s that simple. How often does one get to [exhibit in] a circular gallery? This was a wonderful opportunity to take an idea and work with it. The paintings are all the same and [yet] not alike. So, they take you around; you can see the colours changing.’

When it opened in late October, Steir’s show echoed many of the natural colours visible in the foliage on the National Mall just outside. Warm oranges and bright yellows stand out against cool blues and deep purples like changing leaves against an autumn sky. The circular route required to take in ‘Color Wheel’ echoes the one you must undertake when viewing Barnett Newman’s ‘Stations of the Cross’ (1968) – a series of 14 abstract paintings on permanent display at the National Gallery of Art on the other side of the Mall. Moving through either of these installations, you may stop before certain images but must ultimately take the series in as a whole.

Discussing her ongoing ‘Waterfall’ paintings series, which she began in the late 1980s, Steir elaborated: ‘I stood on a ladder and made a wave gesture and threw the paint at the canvas. I never dripped paint. I poured or threw it. Dripping is not macho enough for me.’ The audience may have chuckled at this obvious jab at the abstract expressionist technique adopted by Jackson Pollock, yet it was notable how swift Steir was to distinguish herself from the predominantly male canon of postwar American abstract painters. With ‘Color Wheel’, Steir proudly and uncompromisingly keeps the tradition of painting alive – on entirely her own terms.