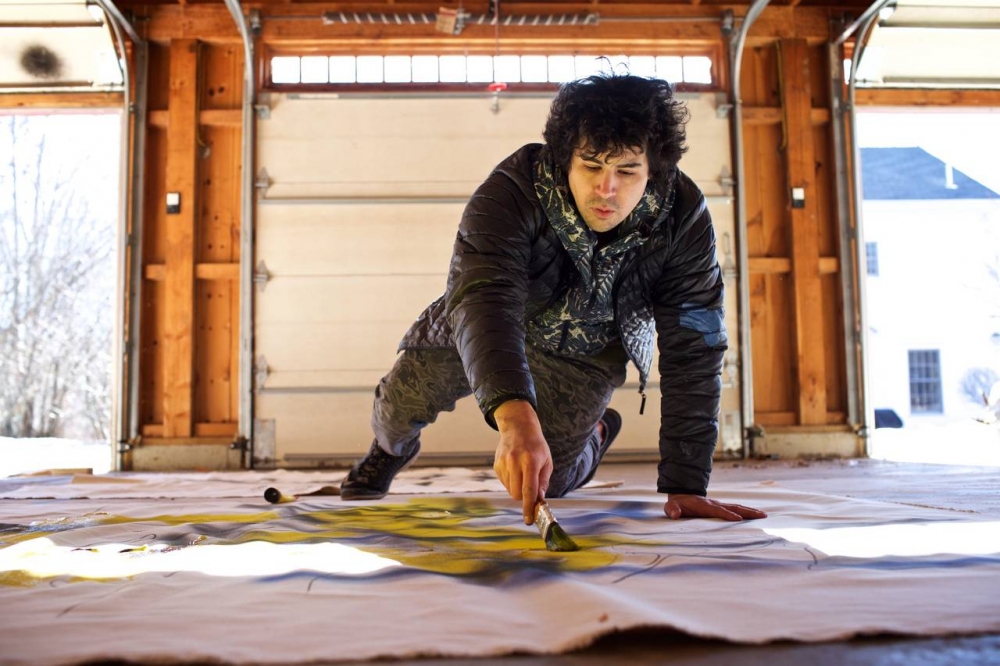 When a young Brooklyn couple fell in love with a country
house and bought it last May, they couldn’t bear to have it
sit idle while they worked in New York City during the week.
So they invited artists to live and work in their white
farmhouse in Chatham, N.Y., for a month at a time for
free. Now painters, sculptors and performers come to mix
colors, hammer and rehearse. When the owners drive up
on weekends, they share spaghetti dinners, wine and board
games.
Call it a salon with a pond. About 130 miles north of the
city, “The Macedonia Institute” is named for the road it sits
on and its initials, TMI, slang for “too much information.”
Artists get TMI baseball caps upon arrival, complete with
a logo of a flying pig, inspired by a porcine weather vane
perched on the red barn used as a studio.
Things don’t always go according to plan.
A 30-year-old from the Bronx, Yves Scherer, brought a
chain saw. One of the owners, Aidan Thomas, told him if he
got bored he could take down the dead tree out back. The
sculptor chopped the wrong one, cutting a live apple tree in
half, and used the wood in some of his pieces.
The owners laughed off the mishap. “I don’t want to be
worried about my things,” Mr. Thomas said. “I want to be
worried about connections and people.”
The sculptor says he plans to make it up to them. Since
the institute encourages artists to leave something behind
for others to remember them by, Mr. Scherer is designing a
bronze apple to hang from a branch of what remains of the
tree. It “will be carrying ‘fruit’ in the winter, which will be
beautiful,” he said. “Like the eternal object of desire in the
garden of Adam and Eve.”
Mr. Thomas bought the 4.5-acre hillside property with
his fiancée, Devora Kaye. (He proposed in the farmhouse
kitchen by writing, “Will you marry me?” on the chalkboard.)
She is communications director at the city’s Department of
Education. He is a dean of curriculum at a charter school,
Leadership Prep Bedford Stuyvesant, and training to be a
principal there.

Opening up their second home to artists is a fun way to
foster creativity, the couple said. “The sharing economy is
one of the better acts of the world right now,” Mr. Thomas
said.
“It seemed such a shame to have a house we could only
come to six or eight days max a month,” Ms. Kaye added.
They would like it to be used more often.
In millennial fashion, the pair of 31-year-olds invite artists
they like on Instagram to participate. They meet candidates
to make sure they click before scheduling a “residency.” So
far, eight artists have stayed at the institute, usually one at
a time, and more than a dozen are on the calendar.
For some, the near silence of the countryside is a welcome
change. “It’s cool to hear your own thoughts,” said Robert
Nava, a 32-year-old from East Williamsburg. During two
weeks this month he filled the farmhouse basement with
bold paintings of monsters, vehicles and cryptocurrency.
He even spray-painted piles of snow outside.
One challenge was getting groceries because he doesn’t
have a car and couldn’t find an Uber driver in the area. “I
befriended the only taxi in town,” he said.
Lex Brown, a 28-year-old sculptor and performance artist
from the Bronx who finished a Master of Fine Arts degree
at Yale last spring, toured the studio on Sunday before
settling in for a month’s stay. “I’m so excited to have all
this space and time,” she said. “Navigating the city takes so
much creative energy.’’