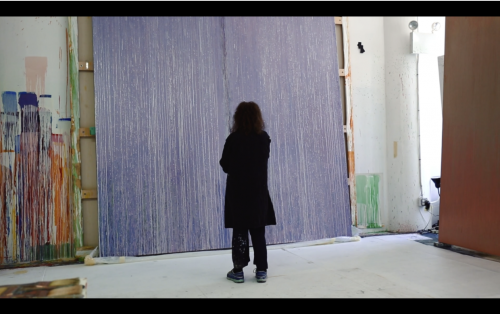 Steir in her studio. Photo: Courtesy of Veronica Gonzalez Peña and Pat Steir

Pat Steir has always had a poetic sensibility. As a child, her nickname was “Tree”—a play on Pa-tri-cia, and maybe a reference to her preternatural toughness and her instinctive grit. She can recall composing a verse “in the playpen”: “Which tree is me? Me or the tree?”

A similar melding of poignant lyricism and piercing inquiry governs Pat Steir: Artist, director Veronica Gonzalez Peña’s affecting new documentary released this week on several streaming platforms. In it, Steir’s spirited ruminations on her work—large-scale paintings produced by pouring, dripping, and splashing colors thinned with linseed oil and turpentine—become a kind of feminist manifesto: For a woman artist of her generation, it took an iron will just to be in the picture.

Steir was born in Newark, New Jersey, in 1938. Naturally inclined toward drawing and poetry, she decided to become an artist after her father insisted that poets made more money. She went to Boston University and then the Pratt Institute, joining her first group exhibition at the High Museum in Atlanta in 1963. But it would be years before her star began to rise—years that she spent as an art director for Harper & Row (now HarperCollins Publishers) and an art instructor at Parsons, Princeton, and the California Institute of the Arts. Acclaim finally found her in the early 1970s, when she executed a series of crossed-out roses. They anticipated the determinedly nonobjective art that would become her calling card. “I wanted to destroy images as symbols,” she’s said of the period. “To make the image a symbol for a symbol. I had to act it out—make the image and cross it out.” Steir’s subsequent experiments with abstraction—and, concurrently, the removal of her hand from the canvas, leaving the fall of the paint to the pull of gravity—culminated with her first “Waterfall” paintings in 1990. Each one was an exercise in the most exquisitely controlled chaos. “I want the paintings to express something in the will of nature,” she remarks in the documentary. “It’s a spiritual quest.”

A rush of plum commissions and solo shows were soon to follow, establishing Steir as one of the foremost contemporary artists of our time. As the New York Times noted early last year, in 2018 she “joined the small group of female artists commanding seven figures at auction” when Elective Affinity Waterfall (1992) was sold at Phillips for $2,295,000.

The film, it should be said, shows little interest in biographical plot points, much less chronology. Functioning—very ably—as her own interpreter, Steir lets the pigments of her life all run together, prioritizing her creative process and the people who informed it. She points to figures like John Cage, whose embrace of chance methods was a major influence; her dear friend Agnes Martin, Mei-mei Berssenbrugge, and Anne Waldman; Sol LeWitt, with whom Steir was nearly killed on the autobahn; and the psychoanalyst Phyllis Greenacre, who gave her the courage to be brave in her art. (As Steir puts it, “I was trying to get into the house of myself, and she let me in—she opened the door.”) The difficulties of her childhood, marked by a strained relationship with her over-competitive father and distant, depressive mother form another through line, as does her long association with second-wave feminism.

The proof of her struggle—and ultimate triumph—isn’t only in the story she tells (which includes cofounding Heresies, an important feminist art collective, in the mid-1970s), but also in the visual of Steir, now slightly stooped with age, at work in her studio. She’s joined there by a small cabal of strapping young men who assemble her canvases, receive her discarded paint cans, and operate the lift that helps her reach the top of her paintings. (Once upon a time, she used a ladder.) In that space, she is indubitably the master of her domain.

Like the tension that exists between chance and control in Steir’s work—she sets her dimensions, she picks her colors, and she points the paint one way or another; then, she says, she lets “the paint itself make the picture”—in the film, her commentary swings from rhapsodic descriptions of Chinese literati painting and Japanese woodcuts to pointed criticisms of the business of art. “[The art world] is easier on older women because they feel like you have artwork they’ve never seen—because they’ve ignored it—so it’s like finding hidden treasure,” she remarks. “[And] because they haven’t seen it and bought it, the pieces are low. They can get a bargain; they can get high quality for less money than if you were a guy and had been famous for 30 years.”

She doesn’t seem angry so much as wearily resigned, or, alternatively, studiously disinterested. She’s earned the place that she occupies now, but after all this time, she also knows better than to let some faceless market dictate her value. “What do you measure quality by if it’s not by the price? You have to have a private measure or a private consensus outside of the hedge fund and money market people,” she says during one passage. “It’s very difficult as an artist, but that’s the world of men. My world has not been so difficult that way.”