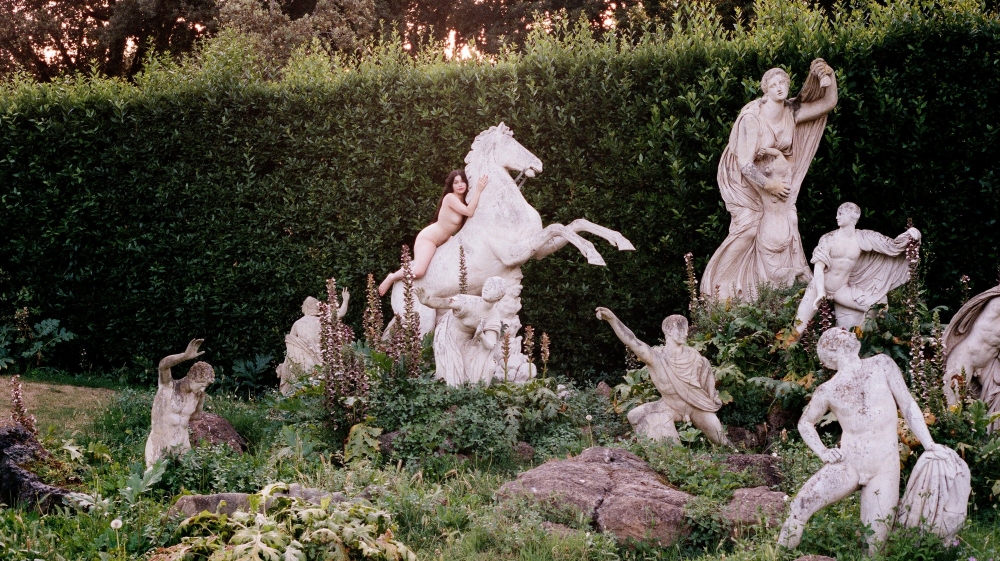 Ariana has decided to spend the pandemic in Rome, discovering a hidden side of the city.

In these pandemic times, Rome becomes a refuge for romantic artists, free spirits and flaneurs searching for spaces where they can dilate and expand their thoughts, exploring ruins and secret gardens, nymphs, and forgotten temples.

A reinterpretation of the ancient with a disenchanted and postmodern spirit has led a new international artistic community to repopulate the eternal city, a timeless place where even the weight of the epidemic is relative to the sense of beauty and poignant decadence.

Among the foreign academies, the collaborations with the highly successful Roman brands, and various galleries, there are many artists in transit and residency in the city.

We met Ariana Papademetropoulos, an iconic and sensual artist from Los Angeles, as well as one of the protagonists of the Gucci Fest conceived by Alessandro Michele and Gus Van Sant, who decided to spend two months in Italy and chose Rome as a destination for her stay.

She told us how this is the city of the illusion of cinema and baroque, which allows you to escape into other spiritual and creative dimensions, and how this is changing her artistic path.

When did you start making art?

I’ve always made art. I think it’s the only thing I’m good at. It all started with the sense of boredom I felt during my childhood when I was stuck for months at my grandparent’s in their 50s house with carpets everywhere and wallpapers. Many of my paintings were born around that time, inspired by the need to imagine things that weren’t there, to grasp a kind of beauty in the domestic interiors that surrounded me, as if the furniture and objects were alive. This is why my paintings are large: to give a more profound extension to reality.

What brought you to Rome right now, and what made you stay there?

Two months ago, I met Alessandro Michele for a project, launching the new Gucci collection, the 7-episode mini- series Overture of Something that Never Ended, co- directed by himself and Gus Van Sant, which was shot in Rome. I appear in episode 5: The Neighbors. My studio was recreated in the series, covered in a magical aura, with a wonderful swing decorated with garlands. A sort of Disneyland version of me painting in Rome. Later I decided to stay here because the beauty of the city attracted me.

How has your life changed, being in a city other than the one you live in, and moreover during a pandemic?

The pandemic makes everything different and complex, even the most trivial thing like going out for a drink with a friend. But you know, seeing Rome right now is so poetic. It is a blessing to be here now, it feels like the ‘70s, and there are no tourists. I feel like I’m living in a movie.

Is this experience influencing your work?

Of course, that’s why I chose to stay. I am working on a project on nymphs, artificial caves, and their architectural history. Natural caves have always been part of my work, so now I have decided to explore the artificial ones, some are very old, even 4000 years ago, but they have only been discovered since the 16th century. These are places in the city that have remained secret.

The cave is a powerful and philosophical symbol. What does it mean for you?

In psychology, the cave represents the natural womb. The artificial caves and the nymphaeums, however, are also architectural works. Therefore the structural meaning is added to the psychological meaning. They are archetypes inscribed in our DNA, just think that there is one in the Playboy mansion too. It is a symbolic element that has survived history up to today.

Your work is surreal, full of magical and symbolic elements, but also of classical and mythological references. What is the relationship between these elements in your creative process?

My work starts from an intuition aroused by something I am attracted to, which I then deepen with theoretical research. My references are always archetypal. Finding the same symbols of the past in Rome that I use in my paintings creates a connection between my work and the history of art that makes me truly understand the value of what I am doing. Being here allows me to understand more deeply the symbols and mythology and their connections. Coming from a conceptual art school, I have never attended painting classes. I have never been encouraged to paint in a classical way, so I am learning so much now, being here, and I can explain to myself why I have naturally been drawn to certain things. I’m here to teach myself.

And the flowers, what meaning do they have in your works?
In this pandemic period, we are reconnecting with nature, and I think this is why people are so drawn to works like mine. Some even like to believe they really have a soul. In a certain way, it is a kind of religious iconography, and it refers to those paintings with the Madonna crying. It is almost a symbol of prayer.

Could they also be a symbol that say something about you?

Yes, flowers and shells are images closely linked to the female sphere; they are beautiful and precious things, and they can also be fragile. They represent fleeting and sad beauty.

Flowers, bubbles, domestic interiors: What kind of reflection on the female universe do you want to tackle with your works?
These are objects trapped there, in my paintings, feminized. I tried to masculinize them, but it didn’t work. It wasn’t the right thing.

You work in series as if your paintings were different chapters of a single story, which you can read all together. Why?

Recently, you have also exhibited in New York at Vito Schnabel Projects; how did that come about?

The title of the project is Unwave a Rainbow. There are paintings of the bubble series and a large rainbow in modular rubber, inspired by Superstudio. The theme of the exhibition is the dichotomy of science and spirituality: it may also be due to the pandemic, but it seems to me that in recent years a continuous debate has been triggered between science and cosmic aspects, the two poles between which we oscillate.

How is spirituality a part of your life?

I try to catch the signs in everything that happens to me. A sign can simply be something that pushes you to go this way or another. Now that I’m in Rome, I let things in my life take the path they have to, learning the things I’m learning, meeting the people I meet. We are forced to stay at home, but I have never traveled so much in my life.

You are somehow part of your artworks: is there a performative side of the interaction between you and the action of painting?

I have always considered myself a painter, but I have never considered myself a performing artist. Maybe it’s because I grew up in Los Angeles, in a world based on illusions, it may be due to my obsession with Jayne Mansfield, with the people who play characters. Anything in LA, even my home, is like a set.

So illusion is part of your world.

What does that mean?

I am interested in the opposition between reality and fantasy. I see my paintings as something of everyday life that turns into something cosmic. Rome is the city of stratified dimensions, of portals. All the entrances here open up another world to you: you walk down the street, you see an open door, you lookout, and you discover a fountain and then a staircase; it’s all a matter of inputs and perspectives. You enter a church, look at the ceiling, and the sky opens. For me, art must take you beyond the perception of what is real and what is not.