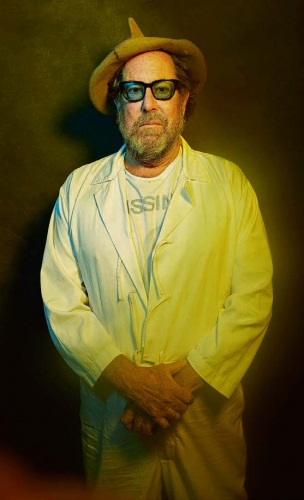 Julian Schnabel loves the Engadine. The painter and filmmaker is showing a new body of work at his son’s gallery and explains why he wants to remember a deceased friend with it.

This time he doesn’t come in pajamas, which he usually wears to film galas. The snow is knee deep in St. Moritz. Julian Schnabel trudges into the gallery in a winter coat. His fur shoes open, from under his coat peer a St. Moritz sweater and white overalls. His head is protected by a little worn out hat. Whoever looks like this will find their way home through even the deepest woods; he carries the wilderness within him. Before one can even make a comment, the artist gets to the point. His eyes are awake like those of a bird of prey in flight. Within minutes, he checks the hanging of the paintings, corrects the lighting, and asks what one thinks of the works.

Six times, one sees dark trees whose trunks and branches cast even darker shadows between a bright yellow ground and a deep blue sky. Deathly, and at the same time a cry for life. They’re recognizable– they’re the gristly trees in the hospital garden in Saint-Rémy that Vincent van Gogh painted over and over again. One could get the impression that someone hasn’t quite gotten over the success of the film, At Eternity’s Gate. Schnabel caused a furor with the Biopic in which Willem Dafoe plays the famous painter.

It is true, Schnabel has been obsessed with Van Gogh in the last few years; he is generally obsessive, that is part of his art. First, he painted the roses near Van Gogh’s grave, to some extent in huge formats. Now, it was time for the trees of the hospital garden in Saint-Rémy. The fact that he painted on broken plates goes back to his beginnings. That was, after all, the masterstroke with which he surprised everyone at the end of the ‘70s: Jackson Pollock dripped the paint onto the canvas, Schnabel glued shards to wooden frames and painted over them. What a brand!

Back then he was considered the Enfant terrible of the New York art scene. When he came to the metropolis in 1973 as a tanned surfer from Texas, Andy Warhol was making portraits of Mick Jagger and John Lennon, celebrities stormed the nightclub Studio 54, and a new, expressive energy seized painting. Those were the years before AIDS and Ronald Reagan. “I was lucky to be able to get together with a lot of inspiring people,” Schnabel says today. He hit the city like a tornado sweeping over everything in its way, he acknowledges with a gesture of his hand. He was young, unspent, and equipped with a huge amount of self-confidence. He established himself as a painter of grand formats who paints whatever art history yields, and who experiments with every thinkable material. He has bought roofing, or truck tarpaulins on which to paint. Ever since, he has also been making films– he received the director’s award in Cannes, and was nominated for an Oscar, making him even more known to the wider public.

Homage to a friend

In the past, he used to be found in the tabloids just as much as in the art press, living like a painter prince in a Renaissance Palazzo in New York. “I hardly go to dinners anymore,” he says. He wants to paint and calculates how many summers he has left to do so at 69 years old. He came to St. Moritz from Montauk. He has long spent his summers at the little town at the farthest end of Long Island, working in his open-air studio there. “I can see the effect of the colors much better outside,” he says. The stark contrasts on the new paintings testify to this, and the broken dishes reinforce them further. Many of them are not painted over, the white of the porcelain reflects the light, whereas the colors absorb it.

The paintings developed from a memory of a friend. The well-known photographer of Africa, Peter Beard, had wanted to show Schnabel a book of photos of the trees in the hospital garden that even Van Gogh had seen. Before he found it, he failed to return home one evening; suffering slightly from dementia, he had gotten lost in the dark. Two weeks later, his body was discovered. When Beard’s wife found the book and brought it to Julian, he wanted to create a memorial to his friend and painted the trees in homage to both.

In this way, Van Gogh’s fieriness and Julian Schnabel’s grief can be viewed in St. Moritz. “They belong here, I am at home here”, he says. He came to the Engadine for the first time in 1979. The gallerist Bruno Bischofberger had invited him. Since then he has been here almost every year. He lives with his wife, the interior designer Louise Kugelberg, at “Villa Flor” in S-chanf. “We’re alone there now.” That is helpful during the pandemic. He has a studio nearby. “I can go skiing and paint, that is wonderful,” he says. His son Vito took over Bischofberger’s former gallery space. It is not a problem for him, that his son sells his paintings: “He has a good program, and it’s not so unusual. Pierre Matisse also sold his father’s works.” It just has to be Matisse. Or Van Gogh.

“I am my paintings”

Schnabel painted many of the paintings for the Van Gogh film himself. And he asked himself: “What is different when I paint a dead painter from his own self-portrait, or when I portray an actor as this painter?” Apart from the fact that Dafoe has a different beard than Van Gogh, one can see how Schnabel could empathize with his dead colleague. “Death has interested me since my childhood, it is my big topic,” he says. The series of portraits is impressively presented in the volume that Taschen will publish at the end of the month.

Today’s artist didn’t just mirror himself in the past life, he also was able to understand himself better. But that is nothing new for Schnabel: “I am my paintings,” this sentence of Van Gogh’s he says about himself.