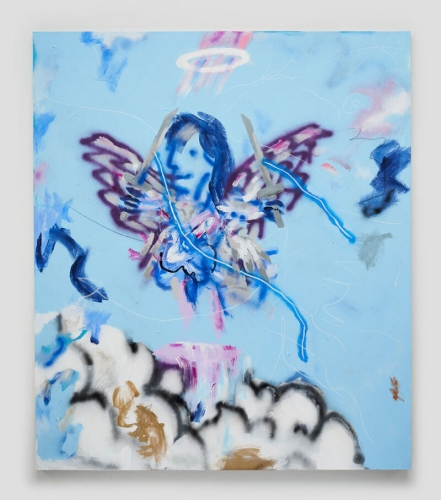 Robert Nava lives with angels. They occasionally appear in the form of winged people in his dreams or find other ways to hint at their presence in his third-floor Brooklyn studio. More than anything, however, the angels inhabit his paintings. They are flamboyant, bold, and radiant with energy bursting through their flirtation with abstraction. Their halos are simple circles; their swords, a thick line of paint. Their bodies morph into scribbles and splashes of bright tones as if they move at the speed of light or appear in the blink of an eye.

Four years after painting his first angel, Nava has opened an exhibition solely devoted to the subject. The paintings in Angels at Vito Schnabel Gallery each contain a single figure with a pair—if not more—of wings, a weapon, and a halo, but they vary in everything else. Nava took my early morning call from his studio where he also enjoys the comfort of residing and waking up at 3 AM to finish a painting or talk with an angel.

Osman Can Yerebakan Let’s travel four years back when you first started experimenting with angels. How did these spiritual agents initially appear in your work?

Robert Nava I’m still thinking about my very first angel painting—I actually want to get it back from the person who owns it. Not to attribute too much to social media, but I was moving furniture from Maine to New York and loading things into a truck when my Instagram was quickly full of responses to the painting. I didn’t know back then that I’d turn them into a series.

OCY What made you go back to the content?

RN Several came after at that time, but they were different from those in my current show. I was a little bit more abstracted with angels back then. They were formless and pushed around, maybe with an added pair of wings and a weapon or a shield. Their stomachs were more scribbled or swirled with paint. I was in the process of developing them into an idea. I was also in a zone of making monsters, too. In fact, I still paint things that I guess are monsters based on what society would think. Angels and monsters started to have their own little battles in my studio: Which one is stronger? If angels defeat the others, then I’d paint an angel. I’d be in the studio thinking that if these monsters fought back how scary that would be.

OCY Visually, there are subtle differences between an angel and a monster, similar to the thin line between good and bad. A denser red color and a pair of horns can push an angel into the dark side.

RN Yes, colors of fire and rage; but I’m now looking for different traits. For example, the notion that angels are falling—sometimes goodness is not their trade at all. Maybe around my fifth or sixth painting in this show, the figure looked like it could be taken as something in the realm of, you know, bad.

NR I think so, too. A lot of the expressions are almost not there or not similar because some of the faces are worked over, such as Gold Sky and Wind Angel. The image has undertones of nearly a skull, and I didn’t want to erase that. Some of them had to be in these good moods, as if they’re having a good time, while others came out the opposite.

OCY What type of research have you been doing on angel iconography? Their pop culture rendition today is based on Western depictions, I believe.

RN Monotheist religions’ angels cross over one another, but names change, such as Metatron and Michael. I find the stories about their different abilities and characteristics really incredible. I was recently watching YouTube videos describing the classification of angels, and they were talking about how spread or closed the wings are on cherubs or seraphims. Raphael’s cherub depiction is childlike and innocent. Before Raphael’s babies became ubiquitous on things like Valentine’s Day cards, cherubs had four heads, including a bull and a lion, and they had six wings. They had giant gold rings with numerous eyes on them, and people even thought they were early depictions of aliens.

OCY Angels are always associated with romantic narratives, and their color palette is usually pastel tones. We could even say they’re romanticized at a campy level. Your angels, however, come off strong and possess their own agencies, characteristics, and probably vanities.

RN There’s a show called Lucifer on Netflix. People forget that Lucifer is an angel amid all the police-chase drama which gets a little cheesy. They introduce other angels, too. I didn’t stay around in the episodes long enough to find out, but they avoid that postcard pastel thing.

I was recently having a studio visit and talking about one of my monster-looking paintings in red colors and a swirling mist. Based on that painting, the person visiting my studio said I should watch a show called Warrior Nun. The characters are getting back surgeries for these circles on their backs, which are actually halos. There is one angel painting that I kept to myself, and she could fight and set things on fire.

OCY What do you think about myths and myth-making when we are surrounded by questions of truth and lie? Reality today is multidimensional and fractured based on different sources of information. Myths were created when collective truths were not subject to scrutiny, and angels are a fruit of that type of thinking.

RN My paintings coincide with a time when we receive massive amounts of information on a daily basis, faster than ever before. The notion of fake news is particularly strange for my generation which first didn’t have the internet and then suddenly had it. This is the age of information as much as of misinformation. It’s crazy to think about building a myth today. Can I make any impossible work within the possibility to create newness? I don’t know if I’m interested in pushing my imagination just for the sake of imagination, but artists can go to that realm of the unknown and dabble there. The unknown, the absurd… Artists may teeter on that possibility factor and might even help science. This makes me think about how other myths were made. A concentrated power in one realm? The fastest storytellers today are filmmakers, and music spreads faster than painting. I think painting is a place you can go slow. In the face of speed, it can help instigate change, and it definitely can lend itself to a different angle of perspective and perhaps hope.

OCY Myth-making works differently today, because now disproving a premise will take seconds as opposed to the past when believing was easier.

RN I guess collective consciousness went faster on one route, which was also harmful in terms of pushing society into a negative aspect. Creating fear helps control the masses. But if a myth is uplifting and hopeful, it could be a wild concept. I’m not really working with narratives just yet. My pieces are very singular renditions that center the figure on canvas. I am currently working on a witch-headed horse with two wolves on its back looking at the planet Earth. This will be a new approach for me. I say I’m always interested in mythology, and I totally am, but I haven’t delved into a narrative aspect yet.

OCY Let’s talk about graffiti and street art. Jean-Michel Basquiat is commonly brought up in relation to your work, but I also see Keith Haring in your handling of singular figures and even Andy Warhol through the icon connection.

RN I’m a huge fan of Basquiat and Cy Twombly because of the raw gesture. Before them, you could call it scribbles, but they proved there is an art to this. I love that static ball of energy toward aesthetics. When you dive into the subjects of Basquiat, you’re opening an encyclopedia of his references.

OCY You always flirt with abstraction in figuration, so color must be extremely important. How do you promote colors across your canvas?

RN I see two separate zones of making a painting. First, you have a preconceived notion, and then you make the work. You already have a vision, and you execute. Even when you’re in the middle, step seven might suddenly inform your next move toward a place you’ve never seen before. The painting makes the choice for you. Another path is to just start the painting, and red goes here and blue goes there. Painting tells you what to do from the start. In this show, the notion of the lighting around angels was a question about how to paint electricity. I like that the answer could be many things, and you can see that wrestling in the work, including many layers of bad paintings underneath.

OCY Do you paint over older works that you are no longer interested in?

RN When you’re in a loaded studio like mine, you never know what might inform your next step. Paintings can talk back at you.

Robert Nava: Angels is on view at Vito Schnabel Gallery in New York City until April 10.