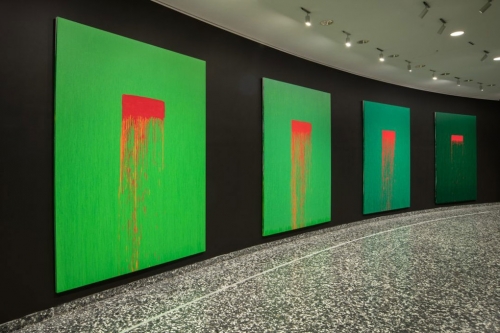 For the past year and a half, a beautifully illustrated German book has been sitting like a totem on Pat Steir’s worktable. Werner Spillmann’s Farb-Systeme 1611-2007 (2009) details a wide range of color theories and color wheels invented over the centuries, from Isaac Newton’s scientific studies on light, to Johann Wolfgang von Goethe’s studies of color and mysticism, to Paul Klee’s and Le Corbusier’s experiments. (Only one woman’s efforts are included.) But Steir is not fluent in German. The inspiration she has taken from that silent oracle has been entirely visual: no theories, just colors, images, optical stimulations. Acting intuitively, not scientifically - with what Duchamp called “the precision of the random” - she has trusted her eyes and expertise in creating her own interpretation of optical relations, Color Wheel, 2018-19, a suite of thirty near-monochromes, each measuring nine by seven feet. Her hues span the primary colors red, yellow, and blue and their opposites, green, purple, and orange, in their permutations and gradations. To each canvas, she has applied layers of wide horizontal brushstrokes in the precisely complementary color. The cycle begins with one black-on-white canvas and ends with a white-on-black version. Steir devised this particular form and process specifically in response to the Hishhorn Museum’s spectacular rotunda, where the window shades have been drawn and where this painted spectrum is now installed in the round against black-painted walls that make each piece pop out draatically. As viewers surrender to the seduction of this feast of colors, all distractions posed by the architecture fall away, and the magnetic power of the circle comes out - a voluptuous, engulfing, nearly mystical vibration that bubbles up through the artist’s systematic endeavor.

Indeed, a viewer can easily perceive Steir’s pleasure in her in-depth investigation of the relations between colors, even if one does not know the details of her process: Starting with red, Steir chose the colors for each work by slowly progressing along the color wheel, transmuting one pigment into the next, and pouring between five and eleven transparent layers of paint onto each canvas. A great deal of patience went into the process. Time has always been important to Steir; she welcomes gravity and chance into her method and gives up control. Here, each new pour required a delicate dance of hand and eye, a distinct tempo. At last, that final touch: Layered strokes divide each canvas, creating unpredictable flows of the opposite color, shorter or longer rivulets of paint, reminiscent of her earlier waterfalls but more aloof and discreet. Each color, each canvas, seems to hum at a different frequency. Inspecting the works closely, a viewer might notice that the pigments seem to have lives of their own. Some, like the purples and magentas, appear to have thick, heavy textures, while the blues allow the underlaying layers to show through. The shades of green are light, like air, and made me feel as if I were wandering through the scented atmosphere of Monet’s Coquelicots (Poppy Field), 1873.

Color Wheel is Steir’s most ambitious, nuanced, and mature conceptual project to date. It reveals her mastery of the basic components of painting - brush, paint, gesture, mark - even in their most reduced applications. From the very start of her oeuvre, Steir, like her contemporary Gerhard Richter, has insisted that painting cam be a conceptual medium, as in her pivotal Brueghel Series (A Vanitas of Style), 1982-82, a complex jigsaw of flowers that unfurls an entire history of Western pictorial traditions. Steir challenged her male peer’s aversion to painting (which originated as a reaction against 1950s Abstract Expressionism) by demonstrating how her medium could employ ideas and systems without necessarily implying expression and emotion (what the Conceptual artists abhorred!). Her dedication to the gesture and the mark, and to her egoless, chance-based method, is the through line of her bodies of work, from the profusion of flowers to the majestic waves, sinuous lines, and iconic waterfalls. Steir’s development of the brushstroke culminates here as an essential sign - a pure, poetic overflow of energy.