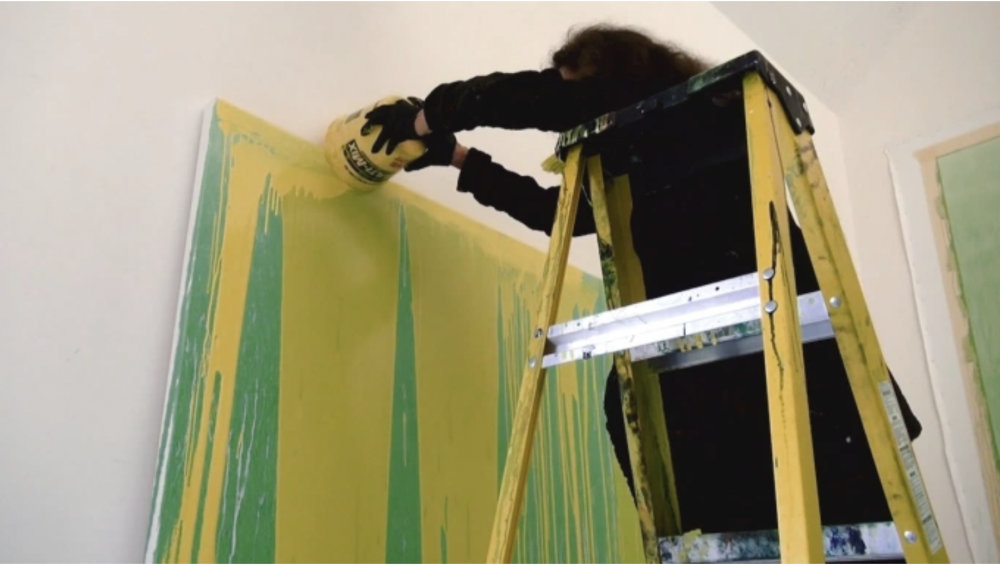 When making an artist documentary, there’s something to be said for just letting the subject talk at length, and so it seems appropriate that the artist Pat Steir is allowed to speak for almost the full run time of Pat Steir: Artist, Veronica Gonzalez Peña’s new film about her.

Over the course of the documentary, which releases on Tuesday for rental on streaming services, the 82-year-old artist, intrepid as ever, dishes on the status of women in the art world, offers insight into the philosophy of Martin Heidegger, expounds on John Cage’s experimental music, muses on the necessity of protest, and acutely dissects her own dreams, mining them for deeply psychological meaning. Her art is, of course, the subject here, but it often feels secondary to all the ideas that Steir is constantly mulling.

Maybe that only makes sense, given that Steir considers her paintings conceptual art, though theory may not be what comes to mind first when looking at her abstractions. With their expanses of muted colors that are interrupted by drippy paint strokes, the paintings have drawn comparisons to the works of Abstract Expressionist painter Barnett Newman, who was about as formalist as artists come. Steir views her work in a different way, telling Gonzalez Peña, “It’s very hard to describe my work as conceptual, but it is, because I set up a set of limitations before I start, and then I work according to those limitations.”

But, because Steir’s rich mind is associative and works in unexpected ways, suddenly she’s talking about more than just her painting. She goes on: “I think everything is conceptual, because if a dog is sitting in the garden and decides to walk through a door, it has a concept: ‘I’ll walk through the door and be in the house.’”

There is a freewheeling quality to all this, and Gonzalez Peña often seems to have trouble keeping up with Steir’s racing thoughts, rapidly shifting the action from the artist’s studio, where she can be seen dribbling paint down a tall canvas using a cherry picker, to the artist’s home, where Steir greets a canine companion. That can make Pat Steir: Artist hard to follow at times, but Gonzalez Peña’s film has a formlessness that seems to befit its subject.

The film isn’t a typical artist documentary. Only briefly does it take a turn toward the biographical; Steir’s childhood is explored in depth, but little else of her life is. Instead, we’re left to discover Steir’s mysteries largely through anecdotes related by the artist. She tells at one point of driving through Germany with artist Sol LeWitt, a close friend (and a poor driver, hence the reason for Steir’s being behind the wheel). Steir entered the Autobahn through an exit ramp and nearly crashed into an oncoming truck. Luckily, she never even got so much as a ticket. “I just got back on the road, Sol screaming at me,” and the two went off to see the photographers Bernd and Hilla Becher, who ultimately gave Steir some of her most prized possessions: plainspoken pictures of houses.

Around the same time, during the 1970s, Steir got involved in feminist causes, and Gonzalez Peña devotes considerable time to that aspect of her career. “I was born strong,” Steir tells the filmmaker. “I think it’s my feminist statement, surviving.” It was that ardent spirit that led Steir to get involved in Heresies, a leading feminist magazine that published key artists’ texts from the era. Steir found it to be a welcoming community.

Though Steir’s own work doesn’t seem to be outwardly political, she has never been one to withhold her opinions. In the film, she claims that her former New York dealer, Robert Miller, was big on selling art by late-career female artists because, Steir says, he could get “high quality for low prices.” Sensing a whiff of ageism in that, Steir marvels at an artist like Carmen Herrera, who is still working, even now that she is well over the age of 100, but expresses doubt about whether the market likes her for her identity as a late-career female painter or for her art itself.

All the while, Steir is matter of fact about her fame. She recalls painting Sixteen Waterfalls of Dreams, Memories, and Sentiment (1990), a large canvas in which 16 brushstrokes appear to melt downward. “I did the first waterfall by accident, and it’s hanging in the Met now,” she says.

Wisely, Gonzalez Peña never gives us the sequence we expect—the one where Steir ambles around the Met, gazing at her work. Instead, she offers amazing sequences where Steir admires the art of others, including one where she visits the Guggenheim Museum’s 2016 Agnes Martin retrospective. With its emphasis on repetition, Martin’s paintings have something in common with Steir’s, and it’s a joy to watch as Steir shrewdly analyzes one of the late-career works on view in the museum’s rotunda.

“Get a real good close-up picture of this painting,” she says, bringing the cameraperson over to a 1984 canvas scrawled with faint lines. Then, speaking of Martin in a way that sounds as if she’s also talking about herself, Steir says, “It’s fantastic that she allowed herself this kind of freedom.”

Pat Steir: Artist will be released on June 9 on iTunes, Prime Video, and other platforms.