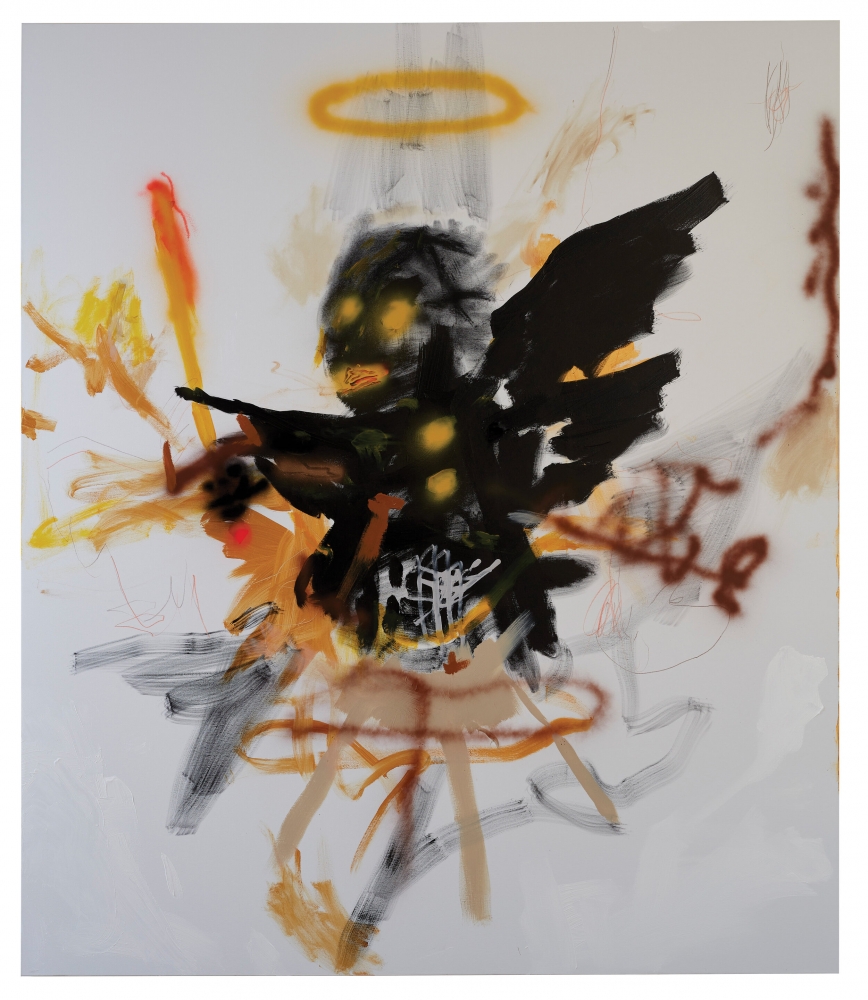 For those amongst us who’ve shared visions of angels, they’ve often taken the form of birds. Winged and weightless, whether they’ve descended to impart a message, or remind us there are greater bounds and reaches to this existence—the visit is always brief—before they’re once again headed skyward into the liminal and indescribable. Robert Nava, a Brooklyn-based artist, has recently encountered angels, but it would appear they are of his own summoning. The Mexico-born painter is currently enjoying his first solo show, Angels, at Vito Schnabel Gallery in New York City. And the work? Well, it’s taking flight of course.

Nava, who has recently gained representation by the ever-formidable Pace Gallery, derived his inspiration for this latest series from the winged seraphim that’s appeared in art history dating back to Christian works of the 4th century. Nava’s interest in angels also delineates from past paintings that focused on monsters. “From the color and content of what they are and what they possess,” he remarks, “I would produce an angel for every several monsters.” It sounds a bit like the human gene pool.

Angels is Nava’s first show with a central theme, as many of his previous exhibitions have dealt with variations and embraced a sort of anti-linearity. “I decided to try and make a cohesive body of work, just one after another, continuing with angels,” he remarks, affirming that each angel seemed to almost long for a companion after it was created. Each piece in the show, of which the literature describes as “entirely about the new dawn, a gesture toward the horizon and our collective hopes for something transcendent but also avenging”, is composed of several layered techniques, straying from any sort of structure. However, even in Nava’s process, there is little planning, and there were no drawings in preparation. Unlike previous works, Nava went straight to the canvas and let the ethereal nature of his subject matter guide the brushstrokes.

Like much of the canonical artworks inclusive of angels that have come before this particular effort, the subject matter often perseveres and endeavors through elemental atmospheres and emotive palettes. “I may start with the notion that I want this to be clouds,” Nava says of the paintings’ origins and how they may shift direction, “and somewhat blue and let the colors dictate the beginnings,” and he pauses, then jokes, “But then the question becomes: can you make fire look good or be friendly?”

Nava continues to describe that he created Angels as a sort of studio purge, with the intention of stopping the monsters—as relevant an exercise today as perhaps it’s ever been—but he soon realized the nature of angels are as complex as an orchestra of Arctic Terns migrating from pole to pole, as a planet full of humans seeking wellness and fulfillment. “Well,” he remarks on the angels not quite achieving the purge he hoped for, “Some of them feel like they could be fallen angels, or they could be not so nice.”

Angels is on view through April 17th and inaugurates celebrated gallerist Vito Schnabel’s second New York City exhibition space, this one located in Chelsea Arts District. Nava lights up when speaking about Schnabel’s mentorship and influence on his work, something he truly believes has enabled him to take a kind of creative and spiritual flight. Schnabel? An angel amongst us? Perhaps. Or just a unique mortal, willing to lift a wing and create refuge for a talented companion.