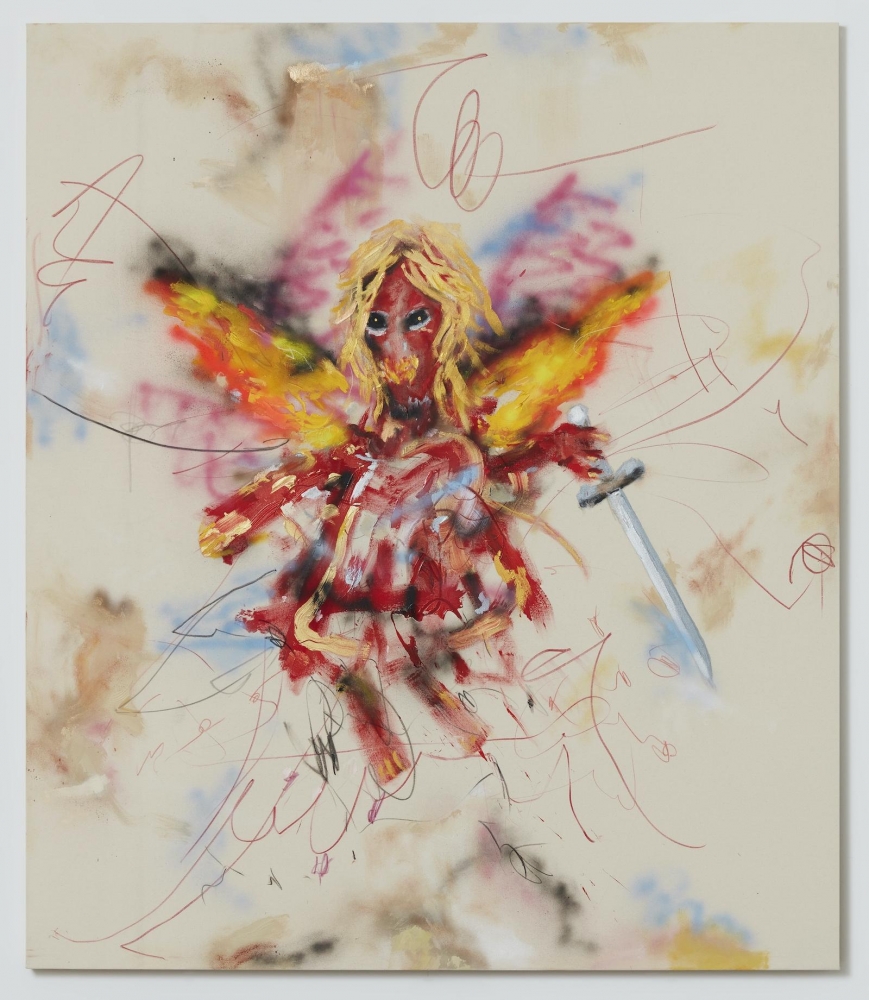 An emerging star on the international art scene, Robert Nava was born in 1985 in East Chicago, where he first started drawing characters from cartoons and cereal boxes as a child. After art studies in Indiana and grad school at Yale, Nava embraced the role of struggling young artist in New York, where he returned to an expressive, childlike style of creating fine art.

Capturing the greater art world’s attention in a three-person presentation at Expo Chicago in 2017, Nava has since gone on to successful solo shows in Brussels, Los Angeles, Copenhagen, and Palm Beach. Fresh off the Palm Beach outing, where he showed dynamic canvases of monstrous sharks at Pace, the talented artist sat down with Art & Object to discuss the arc of his rise, his work process, and an innovative series of spirited angel paintings, currently on view at the new Chelsea locale of the Vito Schnabel Gallery in New York.

Paul Laster: When did you initially become interested in art and how did you express that fascination?

Robert Nava: I began by drawing and scribbling abstractly as all kids do, but I consciously started drawing cartoons and cereal box characters around seven or eight and continued an interest in art through my school years. Art class was definitely my favorite subject.

PL: What did you learn during your undergrad art studies at Indiana University Northwest that helped prepare you for grad school at Yale?

RN: I learned how to draw and paint representationally—from still life to live model—in a very traditional way, but in my final year I was told, ‘now that you are an artist there are no more assignments and you can do whatever you want.’ Even though the school was in Indiana, we were close to Chicago and my professors would tap their friends at the Art Institute of Chicago and Northwestern University to be visiting artists. It was wonderful to be exposed to many different avenues of thought, but the challenges at Yale were far greater.

PL: Which instructors at Yale made an impact on the art that you’re currently making and what was it about them or their work that appealed to you then and still does now?

RN: That’s a tough one because there were so many good teachers and visiting artists there, and I liked a lot of them—even when they were pushing hard, because I realized that it was for my benefit. I really connected with Peter Halley, Huma Bhabha, and Carroll Dunham. They were the standouts, but there were a lot of others who made me think. As far as sticking with me, Huma Bhabha is still one of my favorite artists. I like how she combines the ancient with the sci-fi and the way she uses offbeat materials. She looks the gods and monsters directly in the face and then cranks the volume up full blast.

PL: How long did it take after leaving college to unlearn what you had been taught and discover your own distinctive way of working?

RN: It came pretty quickly because I wanted to get away from the conventional way of making art. I rented a raw studio in Brooklyn, where I was continuously experimenting and fumbling around. It wasn’t that I wanted to do things wrongly, but I was open to error. I relied on my intuition and quickly gained confidence. I made a series of truck paintings and then started passionately drawing and painting mythological beings and beasts.

PL: What was your first big break and how did it affect your confidence going forward?

RN: It came when Roberto Paradise—a gallery based in San Juan, Puerto Rico—exhibited my paintings at Expo Chicago in 2017. It was the first place where my new style of painting was physically shown. The gallery presented a painting of an alligator eating a man, Crunch, and another big canvas of a fiery winged horse, Flamethrower Pegasus, and I immediately knew that these paintings were unlike anything else at the fair. It was a big deal for me, especially since it happened so close to home.

PL: Did struggling in an urban environment help shape your raw style of figuration?

RN: Yes, and it started in my studio building, which was full of graffiti. I’m not sure if I fully understand how inspiration works, but subconsciously seeing all of the marks on the walls and seeing the aggressive nature of the city while working as a truck driver—as fast as it goes and the hustle is on and you’re in the hustle—does come out in the ferocity of the line and intensity of color. And living and working in a small Brooklyn studio is as serious as a heart attack and as laughable as a cartoon at the same time.

PL: What led you to start drawing and painting otherworldly creatures, like angels, dragons, and other mythological beasts?

RN: I wanted to return to my childhood interests. I wanted to see these fabled creatures in my studio. I’m interested in a new kind of mythmaking, even though there are no real stories behind them yet. It opened up a world of imagination while preserving a childlike drive.

PL: Do these types of characters inspire the variety of mark-making and materials that you use?

RN: They definitely inspire the mark-making and the choice of colors, such as when I’m depicting fire and ice or lightning bolts. As far as materials, I’m most comfortable with the ones that are immediate, like acrylic, pencils, markers, and spray paint. I love the speed of working with these materials.

PL: How difficult is it to keep the work upfront, to keep it childlike?

RN: It comes naturally because I’m having fun. There are paintings that I have to wrestle with to make them complete, but I have a natural interest in wanting to keep making work. I think there’s a lot more to unpack and a lot more areas of investigation to keep it going.

PL: Do you try to stay in a zone when working?

RN: I love the zone when it happens, but I think the zone comes by continuously drawing in my sketchbook. It’s like an athlete practicing a three-point shot—when the game comes, he can just hit the shot without thinking about it. You can get in a zone with painting, in a semi-trance state of mind, where it feels like someone else is making the work.

PL: What role does drawing play in the development of your characters?

RN: Drawing is a huge part of my work. I’m really interested in what line can do. There are so many ways to work it. Sometimes when I’m drawing and don’t know what I want to do, I’ll just start scribbling or making marks and something will come of it. I remember watching my grandmother doodling while speaking on the phone, which may have motivated me to draw.

PL: Are you open to mistakes or things going awry in the process of turning a sketch into a highly expressive painting?

RN: Yes, I appreciate the error. Yet over time, what was a mistake can become another form of mark-making. It gets turned on its head so much that it becomes something good.

PL: Are any of your subjects specifically inspired by art, films, comics, literature, or video games?

RN: Some of them, yes. There are pieces of all of those categories in my work. While sharks are predatory fish that are as old as time, they’re most often considered monsters because of movies, like Jaws or Deep Blue Sea.

PL: How do you achieve the intense level of energy that your work conveys?

PL: What kind of music do you listen to while working?

RN: It’s mostly techno and house, but not all of the time. Sometimes I listen to metal or rap—or even classical. I prefer to put on a two- or three-hour set, where the DJ takes you on a journey. It just stays on and I get going. I get taken on a rollercoaster ride of emotions and there are peaks and valleys in the studio. It has a heartbeat or a pulse that really gets intense.

PL: Your recent show at Pace in Palm Beach was centered around sharks, while the exhibition at Vito Schnabel Gallery is focused on angels. Are these bodies of work about characters who are both good and evil, and if yes, how is that expressed?

RN: Good versus evil is something that’s present in the work, but it comes down to what the characters are doing in the paintings. There are happy sharks and scary sharks, and the same is true of the angels. Some of the angels are expressing anger or rage and others are seen smiling or saving people, even if they look frightening. I like going back and forth between what’s helping and what’s harming.

PL: Are you battling with these characters when creating them or pitting them against one another once the paintings are finished?

RN: I’m not, but the studio sometimes does. I think that’s how the first angel painting was made. There were so many monster paintings that I wanted something that could hold them back, like could this beat that one. I don’t think about it when I make them, but when they’re done, they have their own conversations.

PL: How do you attack the canvas? How do you interact with it when painting?

RN: There are different approaches, different energies, depending on the variety of music. If classical music is playing, I may go slow with the line, gracefully, and elegantly. If it’s techno, I’ll hit it like a storm—I’ll go in hard with the paint and step back while it’s drying. You could think of it like jousting, with in and out gestures. You could also say like ping pong, going back and forth. Some of the studio time is just straight up looking and then diving back into it.

PL: Do you keep your tools and materials close at hand?

PL: You’ve made the paintings Asteroid Maker Angel, Cloud Rider Angel, and Night Storm Angel for the show. How many types of mythical angels are there?

RN: There’s an endless number of angels. I have a few books on them that I use for research. I like to just dive in, as sometimes it’s just a bit of text that will load me with ideas. They have specific traits, depending on the religion of origin. There are angels for the type of day it is and an angel that protects particular types of wind from certain directions. There are fallen angels and angels of death. There are so many different types.

PL: Are you turning old tales into new fantasies?

RN: Somewhat, but I haven’t really placed them in complex narrative settings yet. I think that will come, but right now I just envision them one at a time, as very iconic figures.

PL: What role does your studio mate, a black cat named Jumanji, who has a big presence on your Instagram page, play in the creation of these contemporary myths?

RN: He’s definitely got something to do with it. He’s in there—or at least his hair is literally in there. I see a lot of him in the work. His eyes are like a dragon’s eyes and his teeth are quite ominous, and when I consider his soul, it seems very ancient. He’s the only other presence in my studio, but that may soon change.