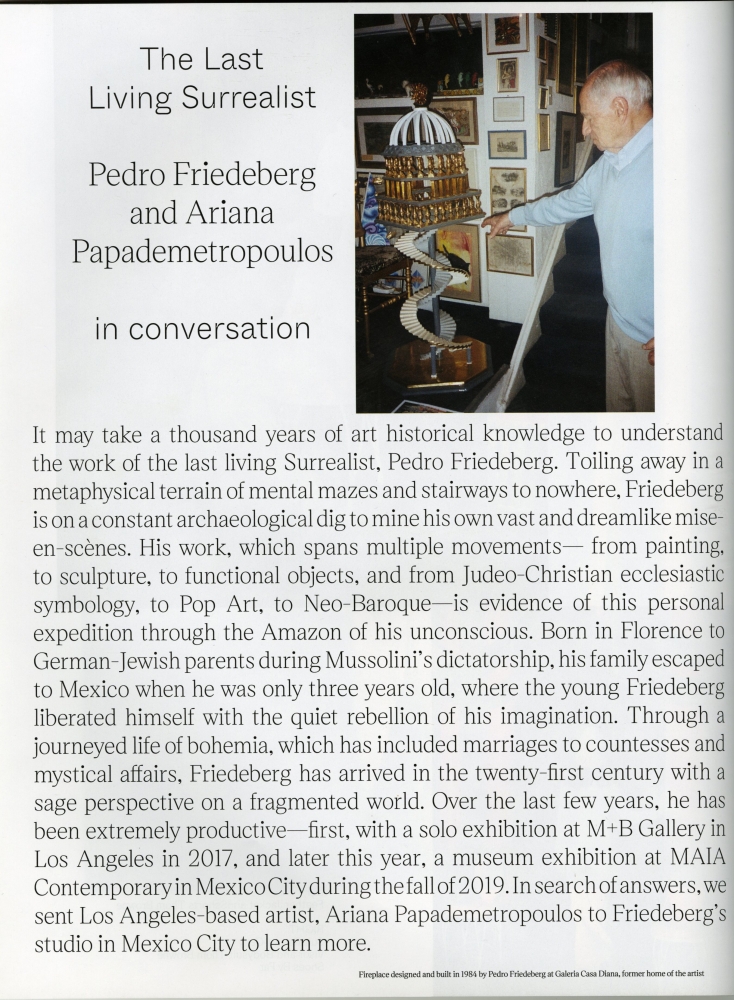 It may take a thousand years of art historical knowledge to understand the work of the last living Surrealist, Pedro Friedeberg. Toiling away in a metaphysical terrain of mental mazes and stairways to nowhere, Friedeberg is on a constant archaeological dig to mine his own vast and dreamlike mise-en-scénes. His work, which spans multiple movements—from painting, to sculpture, to functional objects, and from Judeo-Christian ecclesiastic symbology, to Pop Art, to Neo-Baroque-is evidence—is evidence of this personal expedition through the Amazon of his unconscious. Born in Florence to German-Jewish parents during Mussolini’s dictatorship, his family escaped to Mexico when he was only three years old, where the young Friedeberg liberated himself with the quiet rebellion of his imagination. Through a journeyed life of Bohemia, which has included marriages to countesses and mystical affairs, Friedeberg has arrived in the twenty-first century with a sage perspective on a fragmented world. Over the last few years, he has been extremely productive—first, with a solo exhibition at M+B Gallery in Los Angeles in 2017, and later this year, a museum exhibition at MAIA Contemporary in Mexico City during the fall of 2019. In search of answers, we sent Los Angeles-based artist, Ariana Papademetropoulos to Friedeberg’s studio in Mexico City to learn more.