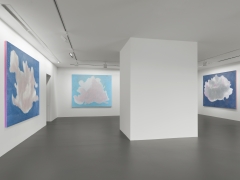 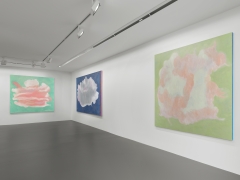 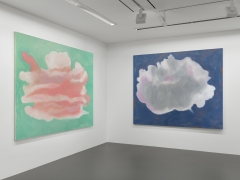 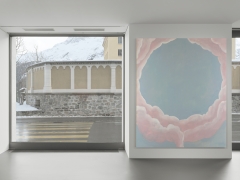 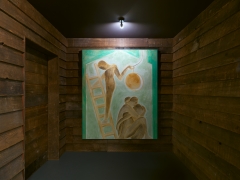 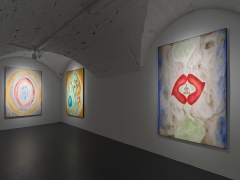 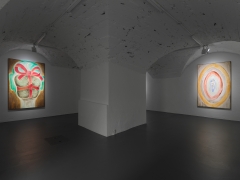 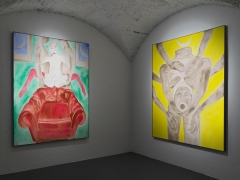 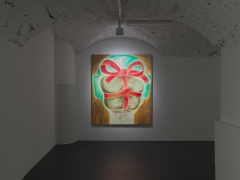 Vito Schnabel Gallery is pleased to announce its collaboration with New York-based Italian and American artist Francesco Clemente, presenting a pair of parallel solo exhibitions in the United States and Switzerland. Debuting new paintings and frescoes, both shows will present boldly expressive, large-scale works that comprise a meditation upon the restless physical and spiritual journey that has shaped the course of the artist’s acclaimed four-decade career. Francesco Clemente: India will be on view at Vito Schnabel Projects, New York, from November 8, 2019 through February 15, 2020. Francesco Clemente: Clouds will be on view at Vito Schnabel Gallery, St. Moritz, from December 18, 2019 through February 2, 2020.

The exhibitions will highlight Clemente’s famed nomadism, which embraces divergent geographies and cultural climates, bridging East and West. The scope and power of the artist’s oeuvre are felt through his distinctive sense of color and his deeply personal visual lexicon, a figural language that subsumes eclectic narratives, rituals, ideas, and symbols inspired by his global wandering. Clemente’s work traverses time and recorded history to probe the mysteries, ecstasies, incongruities, and, ultimately, the gravitas of the human condition. In his quest to explore the metaphysics of spirituality, mysticism, identity, and the self, Clemente has created a body of work in a variety of mediums that is often charged with eroticism and intimacy, rich in references, and expansive in its openness to interpretation.

Opening at Vito Schnabel Projects in New York, the exhibition Francesco Clemente: India takes its name from the title of a new series of monumental canvases that continue Clemente’s lifelong dialogue with the cultural and artistic practices of India, where he maintains a home. The four paintings on view depict maps of the country’s geographic borders punctured with symbols that draw from the itinerant experiences of Clemente’s life, and from his passion for paradox and metamorphosis. Painted in a sensual palette of understated earthen hues, these compositions are accented with brushstrokes of brazen pink.

In one painting, India is composed of a field of pink flowers whose petals are tinged with subtle hints of blue. A background comprised of white skulls – a motif Clemente returns to time and again – surround the outline of the nation, streaked with drips of paint. In another work, the map of India is covered by waves and inhabited by fish, while the Indian Ocean has turned into land. The third canvas depicts the nation as an apparition in the sky; mysterious pink clouds part to form the shape of the country through which the sun’s energy radiates a hypnotic white light. Finally, the fourth painting in the group is engulfed by a smoggy atmospheric haze. Here, a haunting female figure dressed in a traditional sari and rendered with hollow white eyes, inhabits and animates India’s distinctive shape.

Images of clouds are likewise central to the exhibition that will open at Vito Schnabel Gallery in St. Moritz, introducing the new series Clouds (2018) and Aspects of the Moon (2019). These paintings and frescoes reference mystical and celestial themes, and allude to histories in the tradition of painting itself.

Executed in oil on canvas, the paintings of Francesco Clemente: Clouds interrogate the value of an image and the laden symbolism of this trans-historical motif. With a lineage dating back to Medieval and Renaissance painting, clouds manifested a devotional, spiritual presence evoking the miraculous and the divine. Challenging the limitations and possibilities of this artistic inheritance, Clemente’s paintings here foster an exchange between sensuality and spirituality, eroticism and ecstasy. In soft washes of color and dynamic strokes of the brush, these depictions of large cumulus clouds take on the bodily quality of embracing couples with their limbs entwined and morphing into a new whole.

Clemente has also cited as a reference for this series the thirteenth century author Sung Po-jen’s Guide to Capturing a Plum Blossom, a reflection on artistic perception. In his preface, Po-jen wrote: “I am so addicted to plum blossoms that I laid out my garden around them and built a pavilion to view them and published a collection of poems called The Pure and Fragile in praise of them. And still I failed to exhaust their subtlety, much like my ancestor Sung Ching, who turned to writing about clouds when plum blossoms proved too elusive.”1

Also on view in St. Moritz will be eight frescoes from the series Aspects of the Moon (2019), created during the artist’s recent sojourn to Rome. Here, the artist returns to a classical medium and technique, one that is especially familiar to Clemente and deeply rooted in the history and heritage of his native Naples. Clemente has been working with frescoes since 1979, and was the first contemporary European painter to resurrect the tradition. His simple, expressive imagery is charged, intimate, sensual, and at times borders on the grotesque. The fragmented narratives he creates feel allegorical or mythological, with dreamlike visions of the human form as the expression of both inner psychic realms and palettes for the effects of the exterior world.

Clemente populates these frescoes with figures drawn in raw umber and green earth. One climbs up a ladder to reach the moon; it dangles from a thread that has dropped from a chimney within the silhouetted architecture of a house. Against a saffron yellow ground, another figure holds its own disembodied head. Three pairs of arms reach out to caresses the body, while a crescent moon hovers above. In another painting, three figures embrace while one reaches his arm overhead, holding a pair of scissors to snip a string suspending a radiating blue egg. Clemente’s palette here is rich and lush. He mixes darker pigments with vibrant and translucent hues to create a luminous energy and glow. Some frescos employ an aquamarine or deep celestial blue that is reminiscent of the iridescent pigment known as ultramarine, developed from the semi-precious lapis lazuli stone and used widely throughout the Renaissance in “secco” fresco painting.

Non-linear and expansive, the works on view in these exhibitions find Clemente drawing inspiration from cultural, historical, and aesthetic affinities, but continually reinvigorating his art with a pictorial weight that resolutely confirms his commitment to the here and now.

About the Artist
Francesco Clemente was born in 1952 in Naples, Italy. He studied architecture at the Università degli Studi di Roma, La Sapienza in Rome in 1970, before turning his focus instead to art.

Clemente came to prominence in the late 1970s and cemented an international reputation with his participation in the 39th edition of Venice Biennale in 1980. He is most closely associated with the Transavanguardia movement in Italy and recognized as an influential figure of Neo-Expressionism in the United States. Clemente’s generation came of age amidst the politicization of Italy, where conceptual artistic strategies and the dogmatism of Arte Povera prevailed. Against this background of conflict, Clemente chose to concentrate on painting as a model of inner reconciliation and went on to explore a contemplative and symbolic mode of painting that revolved around images of the body as the boundary between inner and outer self.

Surrounded by anti-capitalist and anti-imperialist activities in Rome, social and cultural upheaval, and the dogmas of consumerism that plagued Western Europe, Clemente fiercely sought alternative narratives and images of contemporaneity, and found creative refuge in the philosophical, spiritual, and aesthetic ideologies of the East. Clemente traveled to India for the first time in 1971 and later visited Afghanistan with his friend and mentor Alighiero e Boetti. Before settling and establishing his studio in New York in 1980, Clemente lived on and off for ten years in India, where he studied Sanskrit as well as Hindu and Buddhist literature, educating himself in the library of the Theosophical Society in Chennai (formerly Madras). There he absorbed the culture, craftsmanship, and folk art traditions, while learning first-hand from Indian miniaturists and sign painters who were making billboard advertisements for Bollywood films. 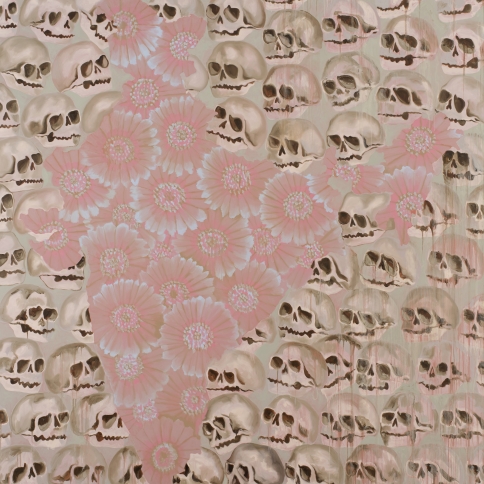