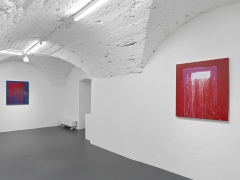 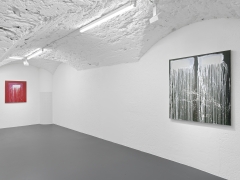 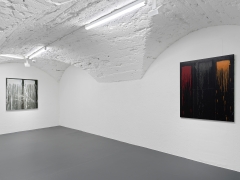 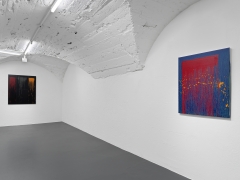 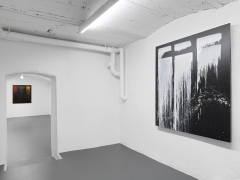 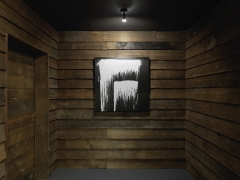 Vito Schnabel Gallery is pleased to announce the opening of three new summer exhibitions at its St. Moritz space: Francesco Clemente: 7-23 2020, Pat Steir: Paintings From The East, and Bob Colacello: On The Road. This trio of exhibitions presents important paintings and photographs by three iconic New York-based artists and friends who are part of the gallery’s program.

7-23 2020 will present four new large-scale paintings made by Francesco Clemente in the months of April and May of this year during the coronavirus quarantine in New York City. While the artist is acclaimed for his unique ability to render imagery that transcends time in an ongoing exploration of spirituality and identity, the works on view in this exhibition find him engaging this specific moment, deploying his distinctive figurative language and vibrant palette to capture the emotional experience of a global pandemic. Inspired by Japanese ukiyo-e prints, Clemente has dated each work in a bold, stamp-like rectangle, a new motif in his renowned oeuvre. The date itself becomes integral to the imagery in each in the painting, as Clemente counts each day passed in quarantine with a different visual expression of isolation, love, loss, and the passing of time. The final work in the series, titled 5-26 2020, depicts a chameleon and a butterfly—predator and prey. Here, Clemente alludes to both the coronavirus pandemic, in which society’s most vulnerable have suffered the most, and the current political unrest in the United States.

Clemente’s paintings are being presented alongside a focused exhibition of six new paintings by his friend and neighbor Pat Steir. During the quarantine, they have spent time together in the shared garden adjoining their respective MacDougal Street homes in the West Village. Since Clemente and his wife Alba were introduced to Steir in the early 1970s by their mutual friend Kathan Brown, the founding director of Crown Point Press, Clemente and Steir have enjoyed a long, ongoing dialogue about art, life, and the ways of the world.

Steir’s exhibition Paintings From The East features the latest paintings from her critically admired Waterfall series, an ongoing body of work begun in the 1980s. Completed at the end of 2019, these paintings on view at Vito Schnabel Gallery extend Steir’s ongoing exploration of intention and chance, gravity and control.

While Steir’s signature technique of pouring, dripping, and throwing paint onto the canvas removes pure determination of the outcome, she creates the parameters for her work by controlling the colors, sizes, and gestures of her works. The Waterfall works begin with the artist applying multiple layers of different colors onto the canvas. Shades of green peak through the deep blue of Untitled XXVII, 2019 (Taipei), yielding a web of vertical lines of vibrant, altered versions of the original hues. After such a base is completed, Steir holds a wide brush dipped in paint against the upper part of her canvas, allowing the pigment to flow downwards, guided only by gravity. The works in Paintings From The East immerse viewers in the veils and skeins of optical effects that come from Steir’s conceptual approach, a process rooted in her studies of Daosim and her early influential friendships with avant-garde composer John Cage and artist Sol LeWitt.

The third summer exhibition at Vito Schnabel Gallery is Bob Colacello: On The Road, a small selection of black and white photographs Colacello made in the 1970s and ‘80s during his travels as editor of Andy Warhol’s Interview. In those years, Colacello seemed to go everywhere and anywhere, from Warhol’s Montauk compound, to Valentino’s Gstaad chalet, and from West German Chancellor Willy Brandt’s residence in Bonn, to the deepest Amazon jungles. In 1976, Colacello acquired a Minox 35 EL, the first miniature camera capable of making full frame 35 millimeter photographs. “It was like a spy camera” says Colacello, “I’d keep it in my inside jacket pocket, and take it out when I saw someone interesting doing something interesting.”

On The Road is Colacello’s second exhibition with Vito Schnabel Gallery. Last year, the gallery presented over 170 photographs at its space in New York.

The gallery will be open Tuesday – Saturday, from 2-6pm and by appointment. Virtual tours of all three exhibitions will be available online.

Francesco Clemente was born in 1952 in Naples, Italy. He studied architecture at the Università degli Studi di Roma, La Sapienza in Rome in 1970, before turning his focus instead to art.

Pat Steir was born in 1940 in Newark, New Jersey. She studied art and philosophy at Boston University and received her BFA from the Pratt Institute in 1962. She is a founding board member of Printed Matter Inc., New York, and the feminist journal, Heresies. She was also a board member of Semiotext(e).

She is the recipient of grants from the National Endowment for the Arts (1973, 1976) and a Guggenheim Fellowship (1982). She was awarded an Honorary Doctorate of Fine Art from the Pratt Institute, Brooklyn, NY (1991), and she received a Distinguished Alumni Award from Boston University (2001). In 2017, Steir was awarded the International Medal of Arts from the US State Department through the Art in Embassies Program.

Bob Colacello was born in Brooklyn, NY, and raised on Long Island. He graduated from Georgetown University School of Foreign Service in 1969, and Columbia University Graduate School of the Arts in 1971 with an MFA in Film. By then he had been hired to run Andy Warhol’s new magazine, Interview, a job he held for thirteen years, becoming one of the artist’s closest creative collaborators. His memoir of that period, Holy Terror: Andy Warhol Close Up, was acclaimed by The New York Times, as “the best-written and the most killingly observed” book on the so-called Pope of Pop.

From 1984 to 2017, Colacello was under exclusive contract to Vanity Fair, writing profiles and investigative pieces on cultural, social, and political subjects. In 2004, he published the first of a two-volume biography of the Reagans, Ronnie and Nancy: Their Path to the White House. He is currently writing the second volume on the White House years and afterward. He is the co-author, with photographer Jonathan Becker, of Studios by the Sea: Artists of the East End of Long Island. A selection of Colacello’s photographs from the late 1970s and early 1980s was published by 7L Steidl in 2007, under the title OUT.

Colacello lives and works on the East End of Long Island. 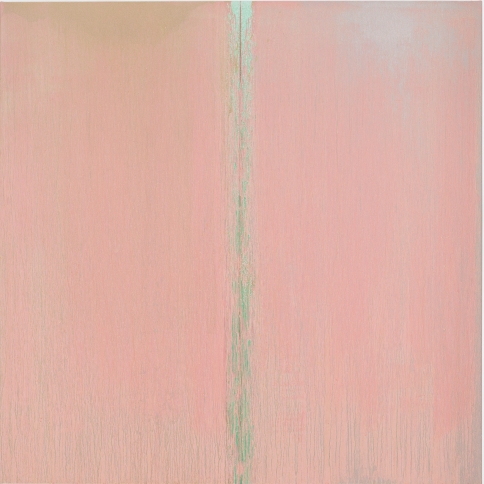